[Here is a rather rough version - sorry! best I can do - of a forthcoming paper to which I contributed; although I am not one of the authors.]

Were the Victorians cleverer than us? The decline in general intelligence estimated from a meta-analysis of the slowing of simple reaction time

Abstract
The Victorian era was marked by an explosion of innovation and genius, per capita rates of which appear to have declined subsequently. The presence of dysgenic fertility for IQ amongst Western nations, starting in the 19th century, suggests that these trends might be related to declining IQ. This is because high-IQ people are more productive and more creative. We tested the hypothesis that the Victorians were cleverer than modern populations, using high-quality instruments, namely measures of simple visual reaction time in a meta-analytic study. Simple reaction time measures correlate substantially with measures of general intelligence (g) and are considered elementary measures of cognition. In this study we used the data on the secular slowing of simple reaction time described in a meta-analysis of 14 age-matched studies from Western countries conducted between 1884 and 2004 to estimate the decline in g that may have resulted from the presence of dysgenic fertility. Using psychometric meta-analysis we computed the true correlation between simple reaction time and g, yielding a decline of − 1.23 IQ points per decade or fourteen IQ points since Victorian times. These findings strongly indicate that with respect to g the Victorians were substantially cleverer than modern Western populations.

Table 1. 14 simple RT studies used in Silverman (2010) and Thompson (1903) along with 16 simple RT means, sample sizes, collection/publication year and references.
Additional. We went back to Johnson et al. (1985) and cross-referenced it with Silverman (2010). The total N for females should be 888 rather than 302. We changed the above N to reflect the correct females sample size.

a
When a range of years is given the average is taken.

2.2. Psychometric meta-analysis
Regression with year is used to generate trend-weighted estimates of 19th-century (1889 — median year of Galton's study) and modern (2004 — the year of the most recent study in the collection) RT means. The population-representative study of Deary et al. (2001) is used for obtaining benchmark estimates of the simple RT/IQ correlation, along with estimates of standard deviations. Psychometric meta-analysis (Hunter and Schmidt, 1990 and Hunter and Schmidt, 2004) can be used to correct for statistical artefacts that typically alter the value of outcome measures. There are five such artefacts that need controlling. These include sampling error, reliability of the first variable, reliability of the second variable, restriction of range, and deviation from perfect construct validity. These corrections are used to determine the true correlation between g and simple RT, and hence the rate of g decline between 1889 and 2004.
2.3. Meta-regression
Meta-regression is a method for examining the influence of one or more covariates on the outcome effects. We carried out meta-regression in which we regressed the effect size – the mean RT of a study – on the covariate — the year of the study, using the software available on www.stattools.net. We carried out a random-effects meta-regression, because it is generally considered to be the more appropriate technique in most studies (Borenstein, Hedges, Higgins, & Rothstein, 2009), and computed Tau2 using the Empirical Bayes Estimate (see: Thompson & Sharp, 1999).
Each study needs to be given a specific weight, and in this case we took the Standard Error of the Mean (SEM) score of the study. SEM is the standard deviation of the sample-mean's estimate of a population mean. SEM is usually estimated by the sample estimate of the population standard deviation (sample standard deviation) divided by the square root of the sample size: SEM = s/√N.
Where:
s
is the sample standard deviation, and
N
is the size of the sample.
The study of Deary et al. (2001) reports a good approximation of the population SD of a simple RT measure. Adding to the study of Deary et al. (see above) we estimate that the population SD = 160.4. The population SD is of course much better than the sample SDs, which are merely estimates of the population SD, and which vary substantially among themselves introducing additional error. So, we decided to use the value of the population SD in the computation of the standard errors of all the individual studies in our meta-analysis, using the formula SEM = 160.4/√n.

3. Results
3.1. Estimation of decline in average reaction times
In Fig. 1 the simple RT means for all 16 effects were regressed against year so as to determine the overall temporal trend. The trend beta coefficient, computed using a random-effects meta-regression, equals .265 and is significant at p = .003.

gr1gr1
Fig. 1. Simple RT mean vs. year for 16 effects. The size of the bubbles is categorically determined by sample size with small bubbles representing studies with N values < 40 and large bubbles representing N values > 40. The scatter is fitted to a linear function, so as to illustrate the secular trend, and is weighted based on a random-effects meta-regression model. 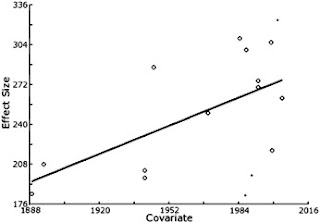 1
MAW conceived the analysis and drafted the manuscript.

2
The two first authors contributed equally to this study; the order of the names is random.

3
JTN conducted the analyses and contributed to subsequent drafts of the manuscript.

4
RM collected and validated the data used in the analysis.