Being creative is not seeking novelty; but drawing a line around part of the world, and abstractly defining a problem

The tests designed to measure creativity by measuring the ability to generate novelty ('list as many uses as possible for a brick' and the like) are misleading - creativity is not about generating novelty, but about revealing underlying reality.

What is going on in creativity is something like drawing a line around a bit of the world - this is 'the problem' - and trying to understand it.

Te mechanism by which understanding happens is unknown, but it involves living with the problem - focusing on it and also having it in the background of thoughts - and presumably sleeping on it, maybe dreaming about it (although this would usually not be remembered) - as I say, in general 'living with it'.

Creativity entails achieving a new model for describing the problem - new to you, that is -not necessarily new in the history of the world.

This can be illustrated by an example of the most basic kind of creativity - yet one which is still not universal. 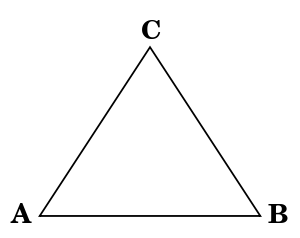 The setting is a garden

I would bet that if the above situation was set up, the average person would pick a carrot from the ground at A, walk to the tap to wash it at B, then walk to deposit the clean carrot in the basket at C, then walk back to A to pick the next carrot - and so on, and on until the carrots are all picked, washed, basketed.

It would (in my experience) only be a relatively rare, creative person who would move the basket to stand next to the tap; because to do this primarily requires understanding 'the problem', and having understood it to use the resulting model to improve functionality.

To walk around the triangle is natural to someone who regards it as our job (in life) to fit ourselves to the world as we find it - the constraints of the world are implicitly accepted; while to move the basket requires a functional, indeed abstract, approach to the world - such that we try to organize the world in order best to achieve these functions.