Further evidence of significant slowing of reaction times, and decline of intelligence, over recent decades in the UK: a method comparing longitudinal prediction with cross-sectional observation (LPCSO)

This is a re-analysis of the data from Deary IJ, Der G. Reaction time, age and cognitive ability: longitudinal findings from age 16-63 years in representative population sampless. Aging, Neuropsychology and Cognition. 2005; 12: 187-215.

The principle is that data on the longitudinal slowing of simple Reaction Times (sRTs) measured in longitudinal follow-up studies of segments through the human lifespan, may be interpolated to predict the expected slowing in sRT between 16 and 63; the prediction is compared with the actual measured sRT in cross-sectional studies at ages 16 and 63.

In other words, the longitudinal data is used to construct an 'ageing curve' which describes the expected slowing of reaction times through the lifetime of an average person. But it was found that the measured reaction times of elderly people were considerably faster than would be expected from the effect of ageing of the youngest cohort - consistent with a generation by generation slowing in sRT.

The difference between the predicted and observed sRT of elderly people is a measure of the slowing of sRT (ie. 'secular' change, or presumed dysgenic change) over the span of 47 years - and this can be extrapolated to estimate the slowing of sRT expected over longer periods (assuming that the rate of sRT slowing is constant).

This Longitudinal Prediction Cross-Sectional Observation (LPCSO) method predicts a slowing of sRT of about 80 ms in a century, which is very similar to the measured difference of 70ms slowing between Victorian and modern sRT.

This confirms the very substantial slowing of sRT since the 1800s, from about 180 ms to about 250 ms (a slowing of about one or more standard deviations of modern sRT) which must surely orrespond to a significant decline in general intelligence.

The LPCSO method could be used on other sRT data sets to check this result - and also applied to other possible measures of dysgenic or secular trends.

To interpolate the declines from age 34-46 and from 44-56 I simply added the rates of decline from either side and halved it - so:

each of these gaps is 12 years (longer than the 7 or 8 years of the longitudinal studies), so the rate per year is multiplied by 12 years.

So to make the graph we have six points with the following amount of slowing - in ms:

- which is an extrapolated slowing of sRT of about 80 ms in a century. 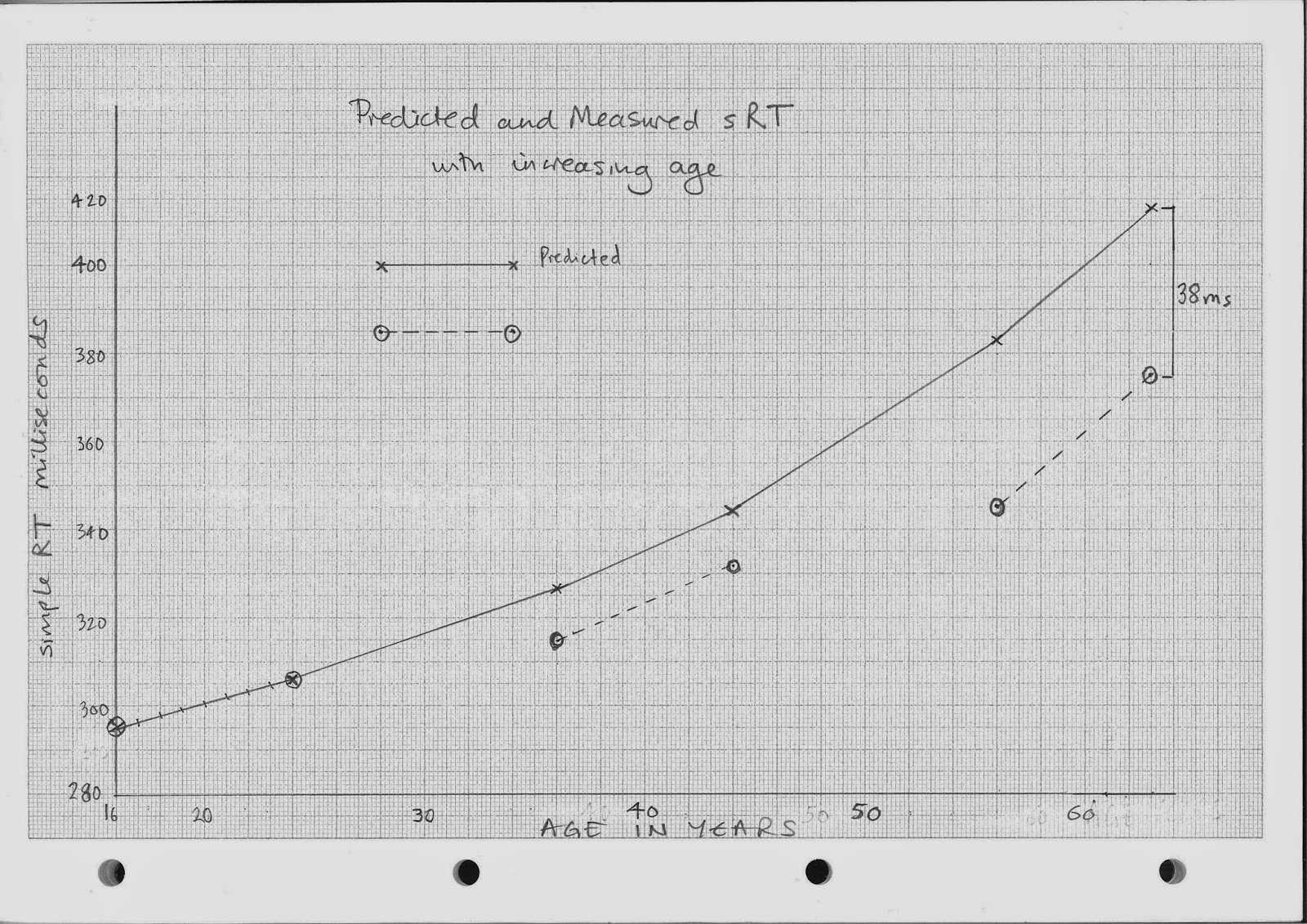 
This is much the same as the amount of decline detected in the previous study, which measured approx 70 ms of slowing between the Victorian and modern sRTs.

The next step is to locate other data suitable for this 'LPCSO' method of comparing the longitudinal-prediction of change with cross-sectional-observations between different generations, to test this estimate and to look at other potential variables.

[Note: the above is a partial and preliminary version of a paper currently in preparation with several other authors.]


Note on the decision to analyze only the female data, and to exclude the male data.

This is to clarify that the exclusion of Male data from the above Deary & Der re-analysis, and the decision to focus only on the Female subjects in this study, was a prior exclusion done before embarking upon analysis; and therefore not a post hoc decision performed after analysis.

The youngest male age cohort is 16-24; and I have been convinced by the work of Richard Lynn that men matured in terms of IQ significantly later than women, and that average native British men were probably not mature until at least age 18.

I therefore decided to omit the 16-24 age group from analysis, on the assumption it would contain a significant proportion of cognitively-immature men whose IQ had not reached the maximum level (thus the 16-24 group would potentially contain people whose IQs were still rising, and others who had begun to decline from ageing – this obscuring the effect of ageing).

By contrast, my understanding was that a large majority of women would have reached cognitive maturity (and maximum IQ) by age 16 – so there was no problem with including women from the 16-24 age cohort.

Having decided to delete the age 16-24 cohort for the men, I was left with only four male data points for reaction times – and therefore just a single internal comparison for the analysis of longitudinal versus cross-sectional change – i.e. that comparison bounded by the 46-54 and 56-63 age cohorts. A graph made of just 4 points spread over just 27 years seemed clearly inadequate for the analysis I envisaged; and there was no internal replicate for the predicted versus actual change in reaction times between cohorts.

Therefore I discarded the male data and analyzed only the females.